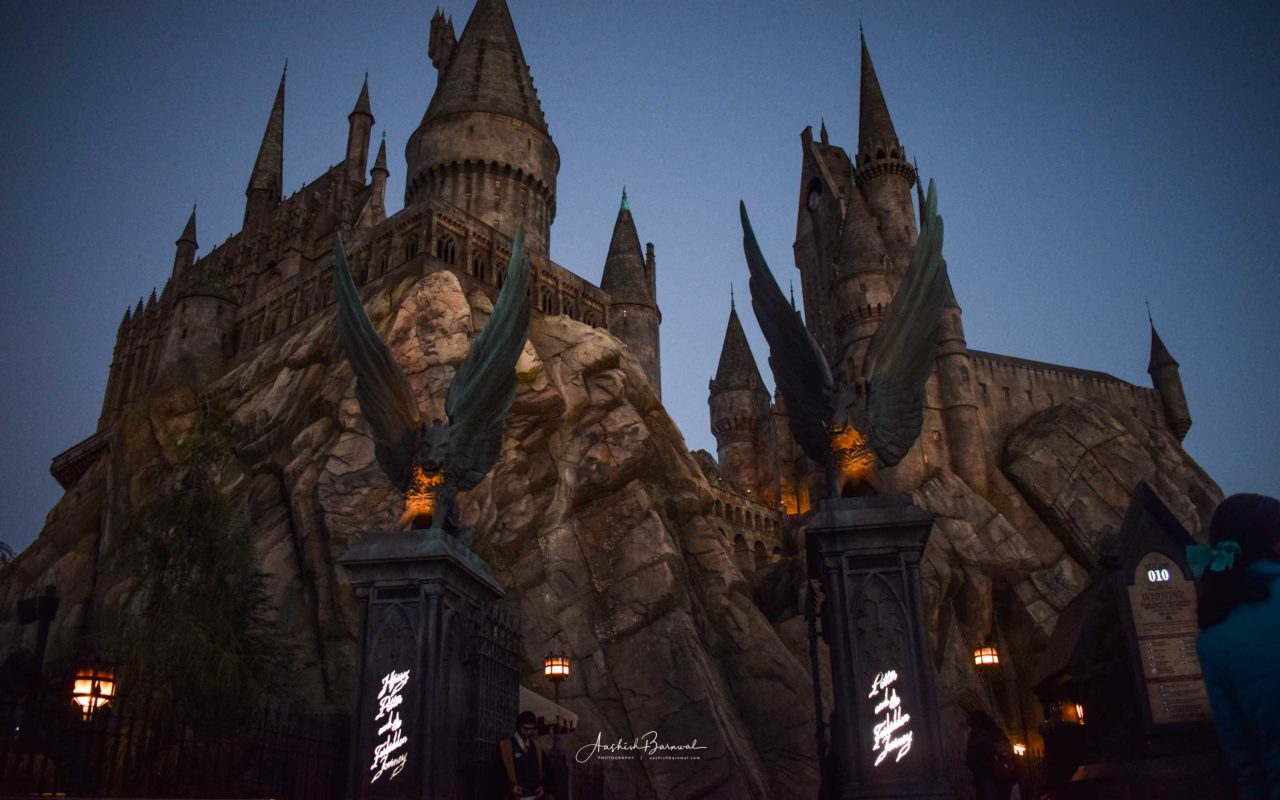 Why do we click pictures? To frame moments, walk down memory lanes and reminisce about events that once awestrucked us. This post is a living example of how pictures help you to relive memories that would have otherwise been lost.

Luckily, I was able to get 4 days of vacation to visit California. California is a beautiful city and my main interest was to wander in the streets of Disney Land and Universal Studios. A dream of decade to see Sleeping beauty castle and roam around in Harry Potter Park with a wizard wand in hand was about to be fulfilled.

Having spent a huge chunk of money in shopping and local traveling, I was reluctant to burn another big hole in my pocket. Though I make exceptions if it comes to my family or my hobbies or sometimes my friends too, being raised in middle class,  my brain is hardwired to see value for money. We got our tickets from Seattle to Los Angeles booked at cheaper rates. My plan looked something like:

One day in San Diego, Visit Disney Land and Universal Studios in LA.

Our plan screwed up when Spirit Airlines managed to fly late by 5 hours the same day I was to visit Disney Land. Spirit Airlines allows only 6 kgs cabin luggage, majority of which was occupied with my camera and its equipments. I managed to get one fine picture depicting bad weather of Seattle while roaming around impatiently at the airport. 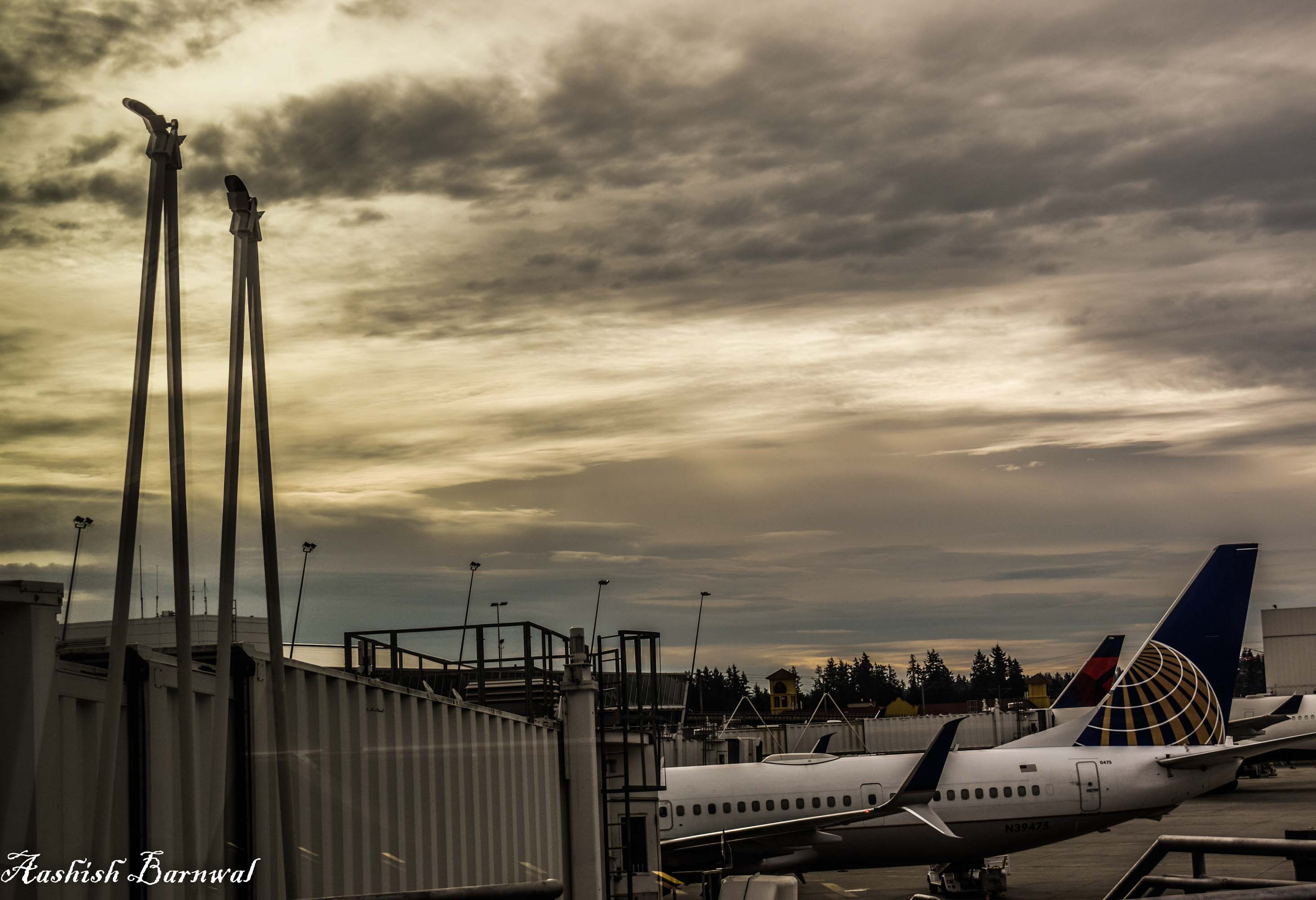 The first thing that comes to my mind when someone talks about California is that it is hotter. From Seattle’s chilling winter where you need layered wear to LA’s summer, the change was very noticeable. One fine evening in Seattle, on the pavement outside Cheesecake Factory, I was waiting for my friend and slightly bored as she was running late. That’s when I witnessed the second snow fall in my life. Seattle is said to be depressing in winters. Well, didn’t look like it to me.

One of the best thing in California I observed was all happy faces around. It makes me wonder, “How can so many happy people exist at one place?”.

We reached LA at ~4:00 PM. It was 4:55 when we reached Disney Land. We were very grateful to book tickets online. It had already started getting dark.

Sleeping beauty castle was always in my To visit list. And people there were as crazy as I was after witnessing this magnificent beauty. Even the huge crowd couldn’t dampen the excitement. Happiness was in the air. 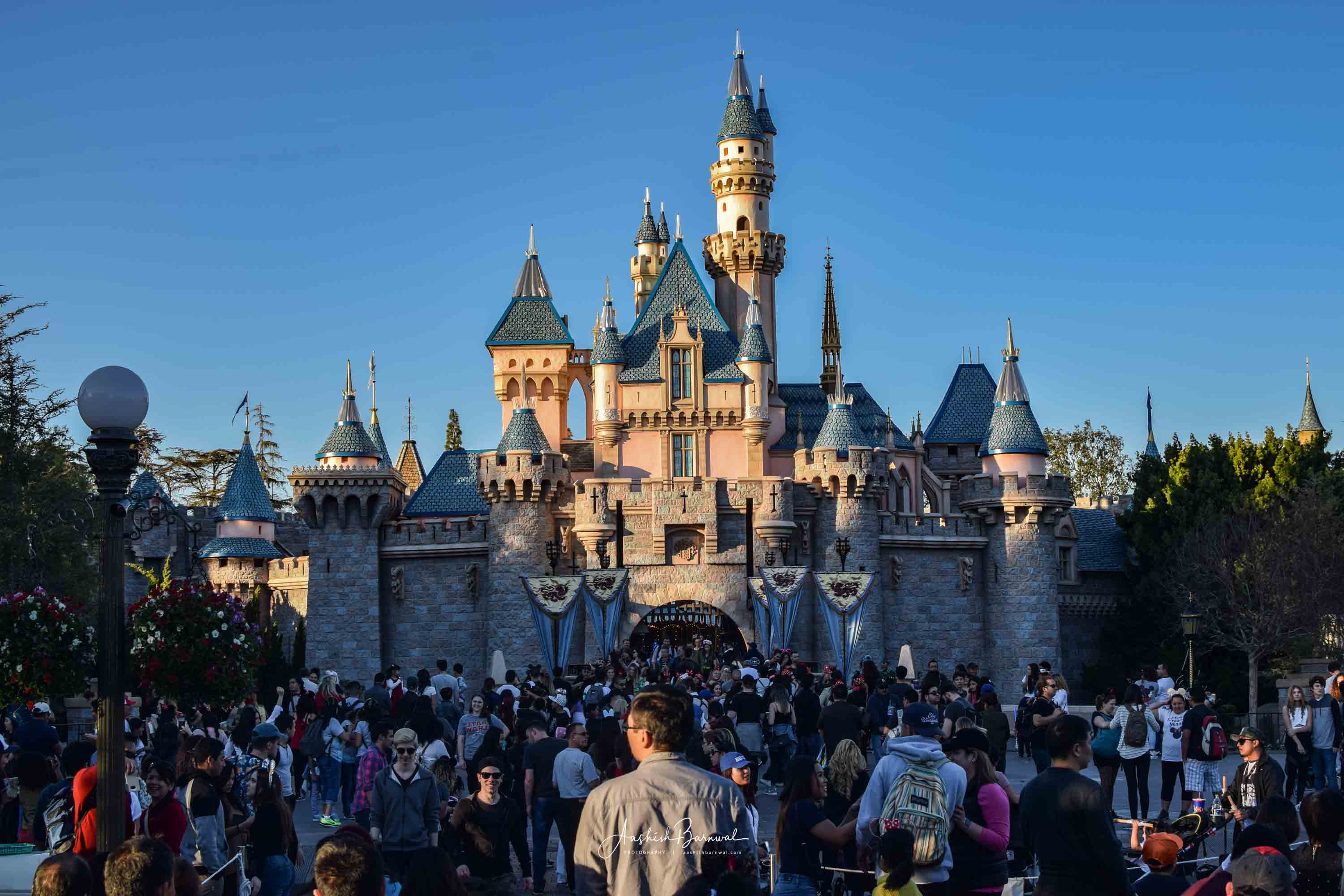 The castle looked even more magnificent when it got dark. As magical and brightening it could be, its starking contrast had the power to stop you from taking your eyes off it. 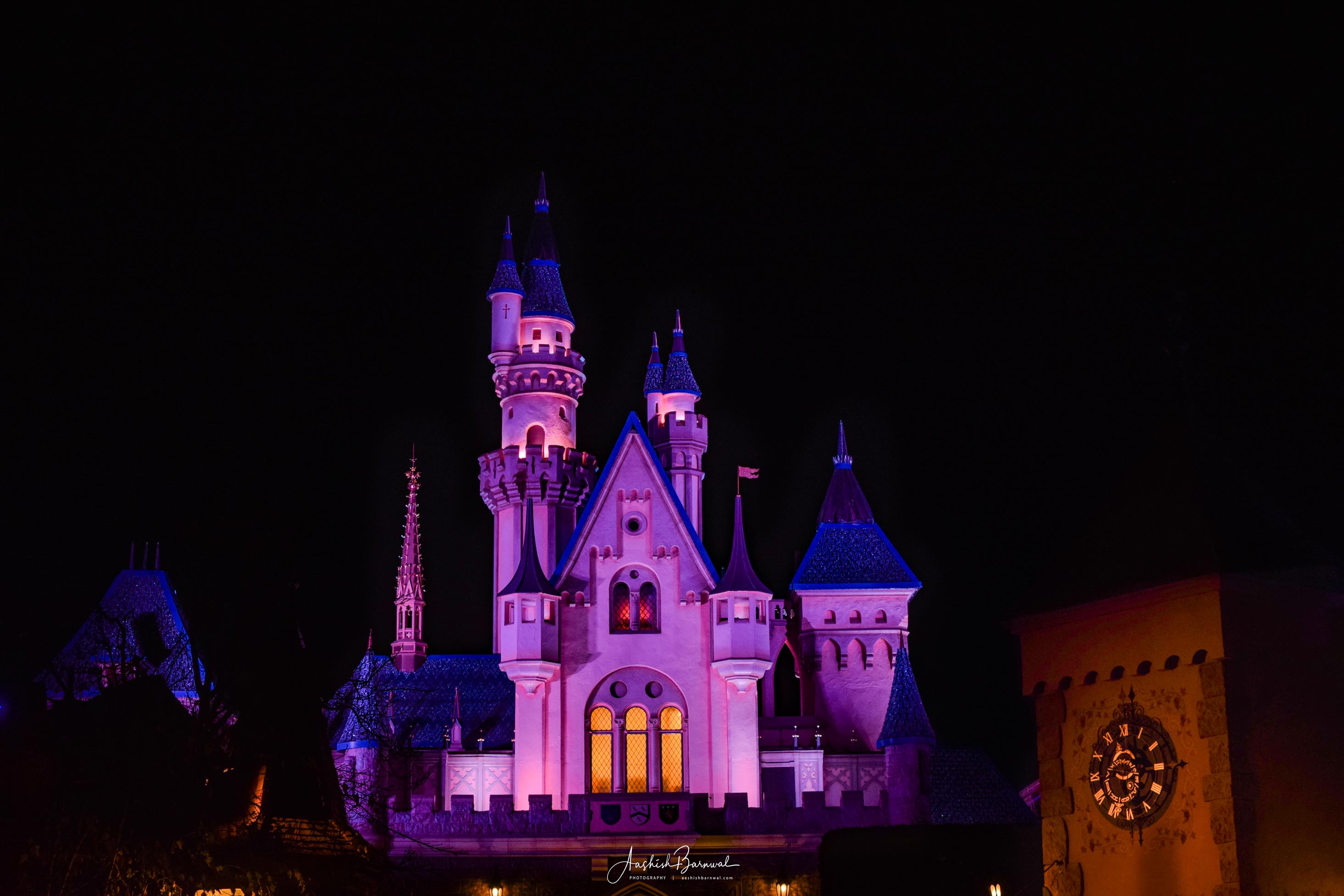 Every part of the park is quite picturesque. If you love taking pictures, it would be hard to put camera down for a moment. The park was full of families and there were so many kids around. It was funny to know that there was a separate parking for strollers and it was full. 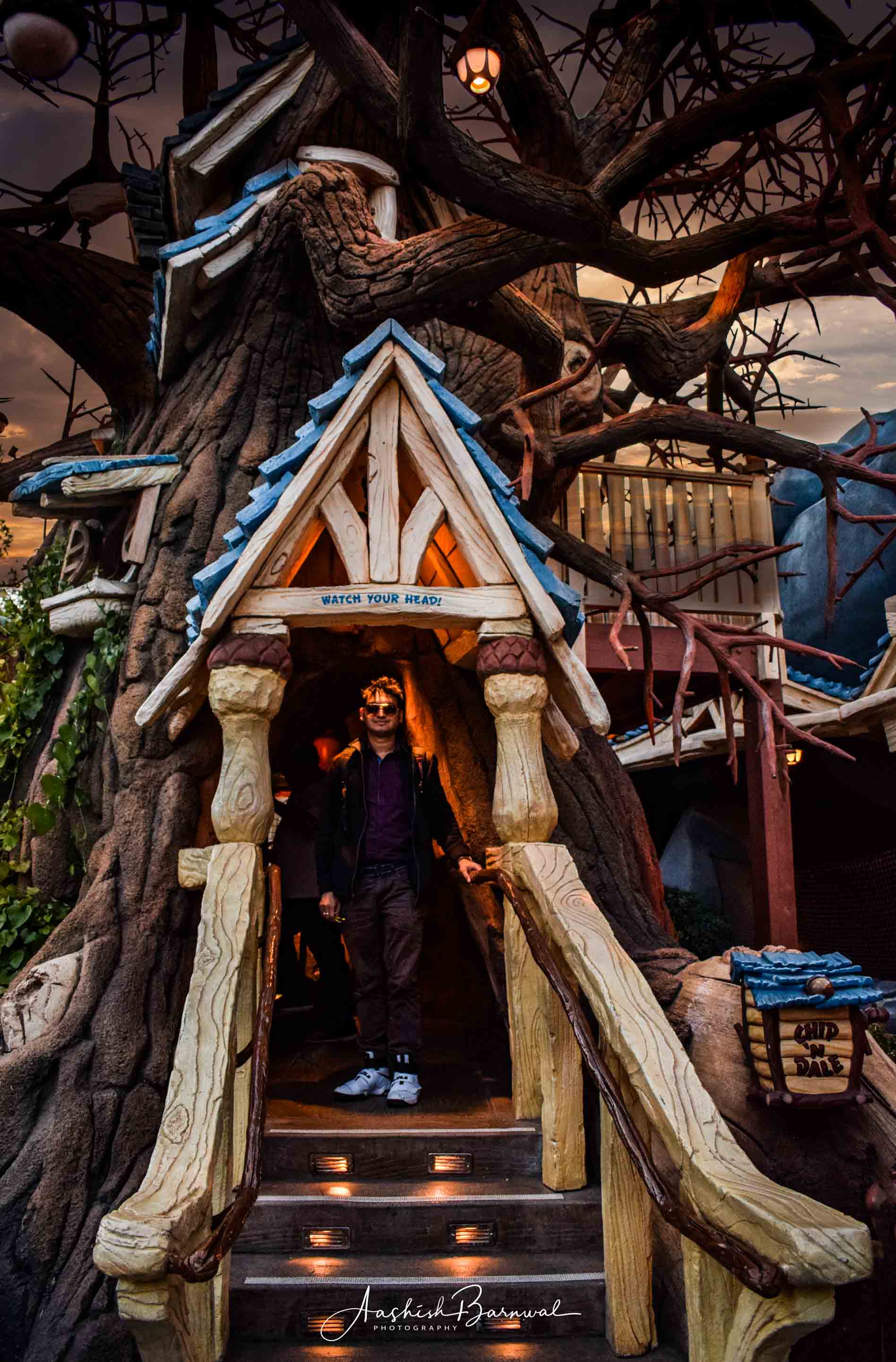 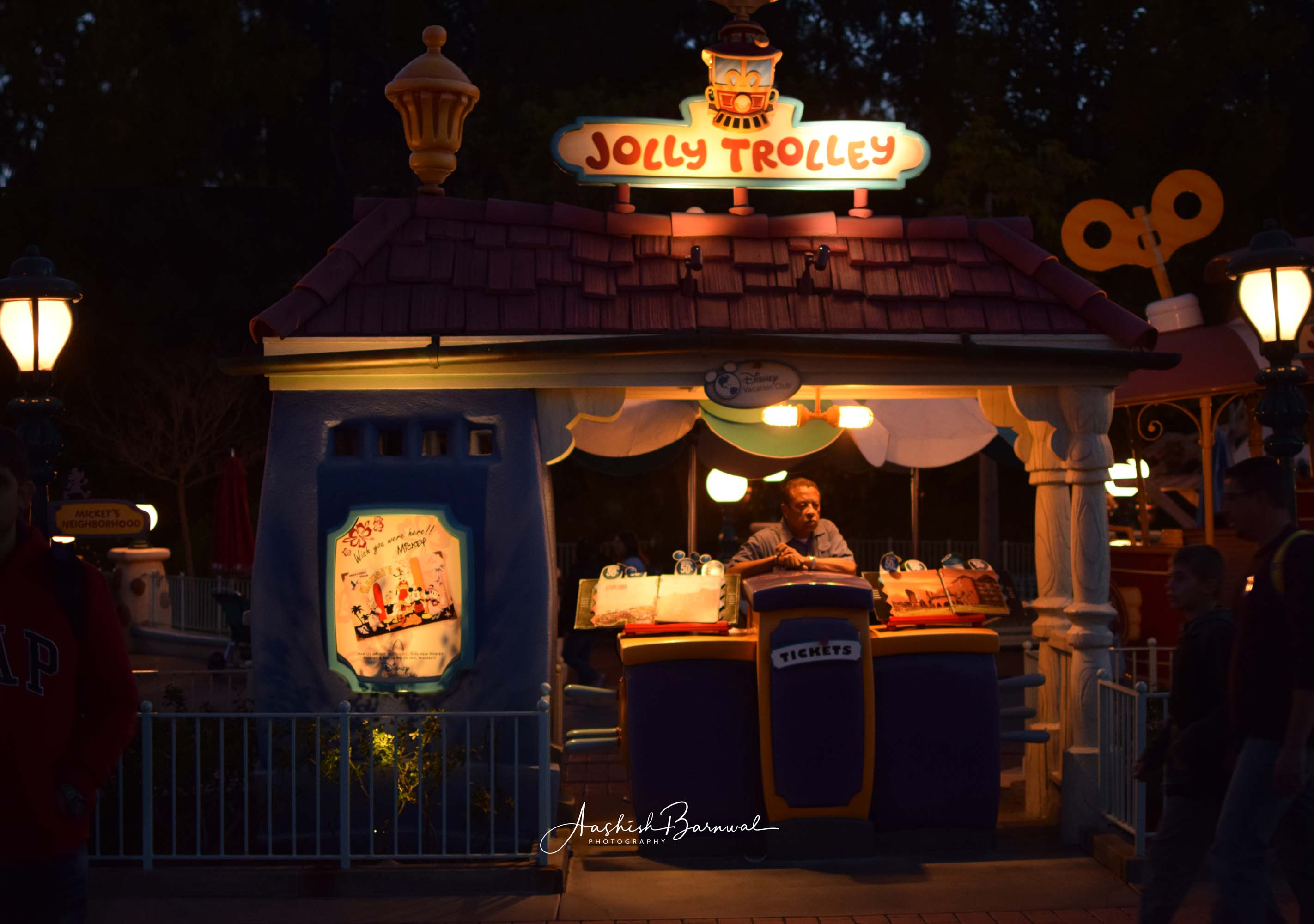 They celebrate Diwali each day

Isn’t it exciting that they celebrate Diwali every day? It was the kind of fireworks we get to see at the start of each of Disney’s movie. It was beautiful and kind of spell bounding.

One of the things I remember very well from my trip to Disney Land, LA is the park being lit up in fireworks for around half an hour. This is probably the best fireworks I’ve witnessed in my life so far. Due to the huge crowd, trying my best to grab the best spot and not owning a wide angle lens back then, this is the best shot I could get. As you might have observed, in the center, lies there the peak of very famous Sleeping Beauty Castle. 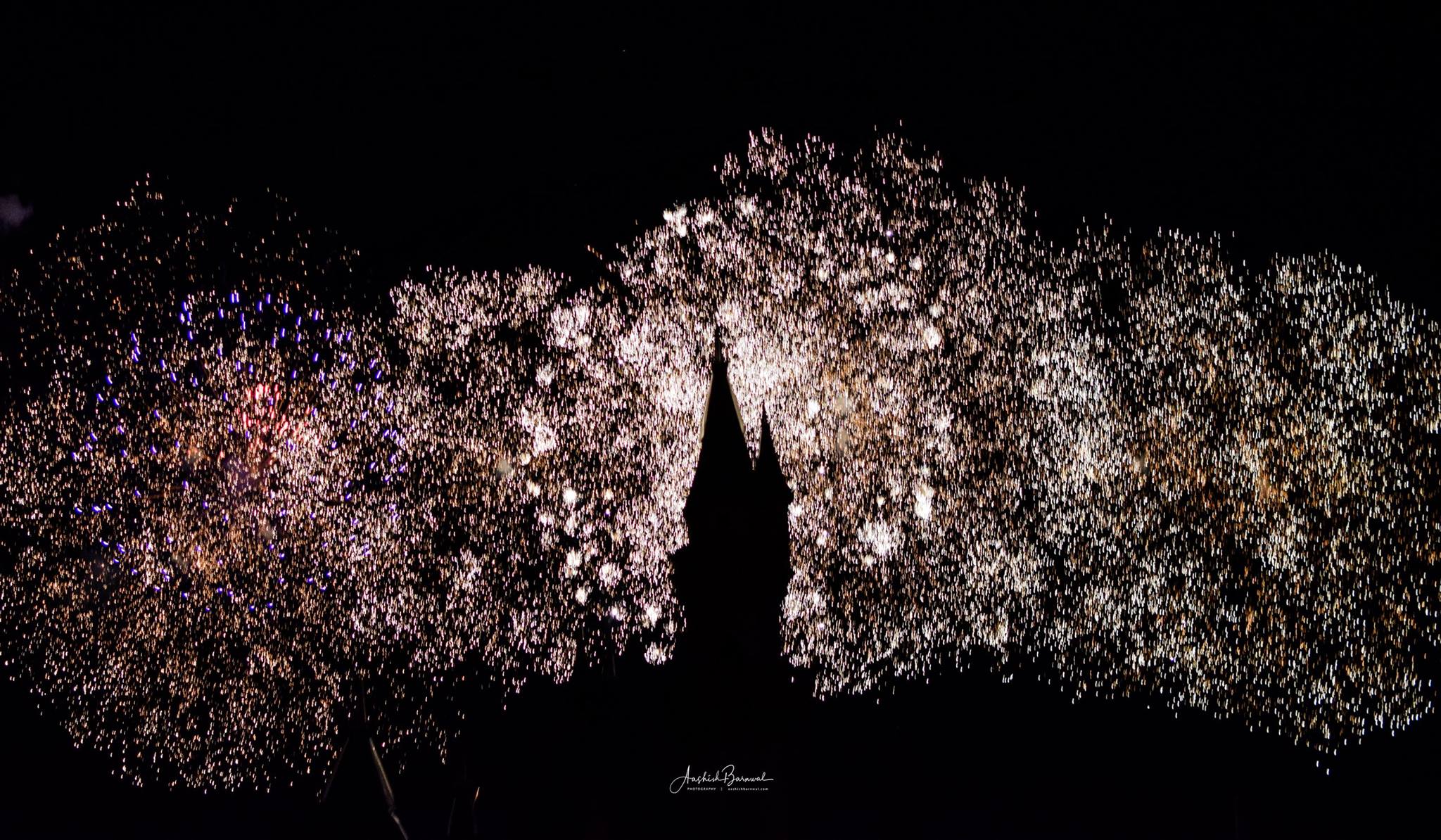 They mark the end of day with an electric parade where you get to see almost every Disney character marching on the narrow roads with awestruck presentation. 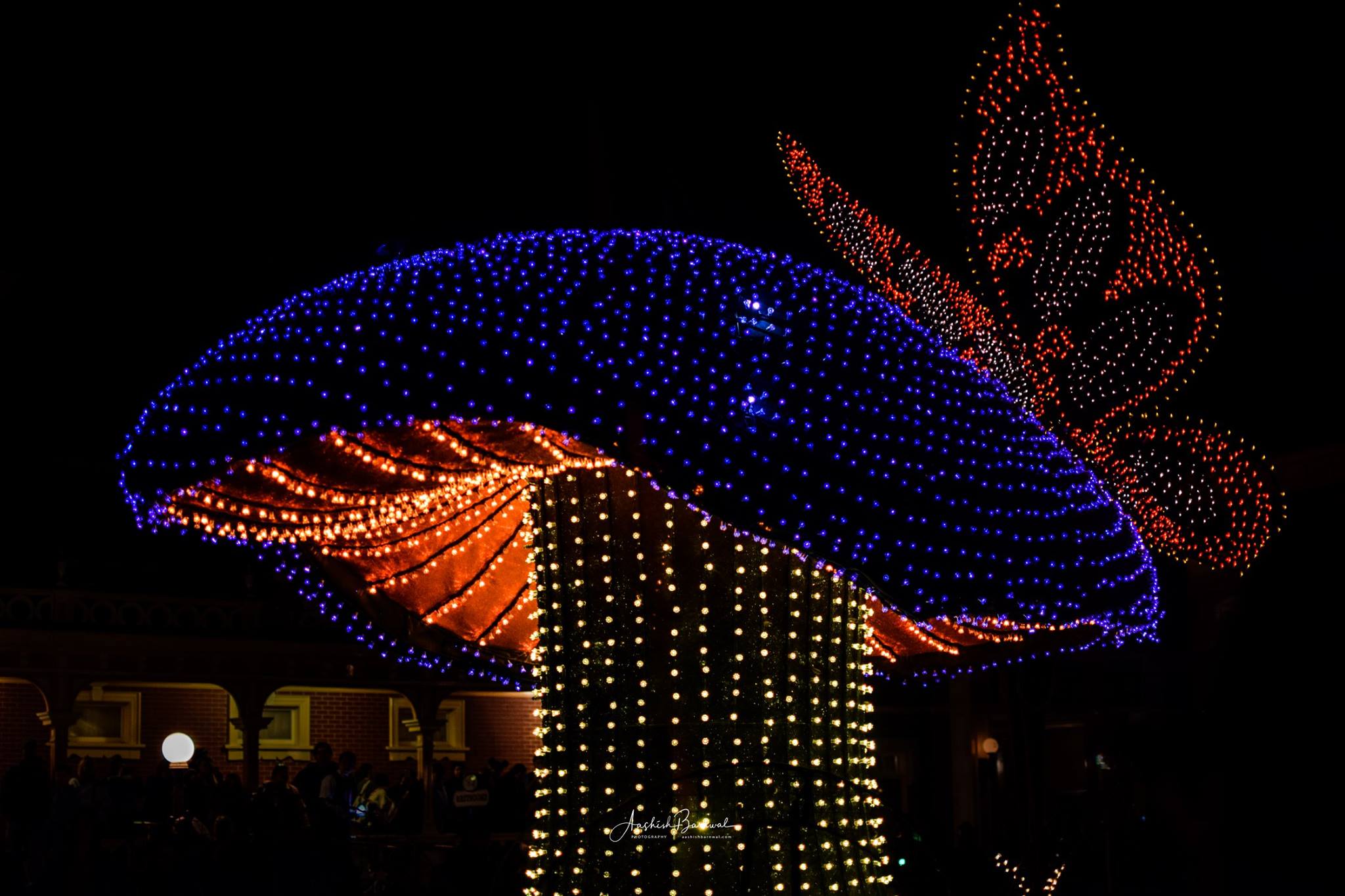 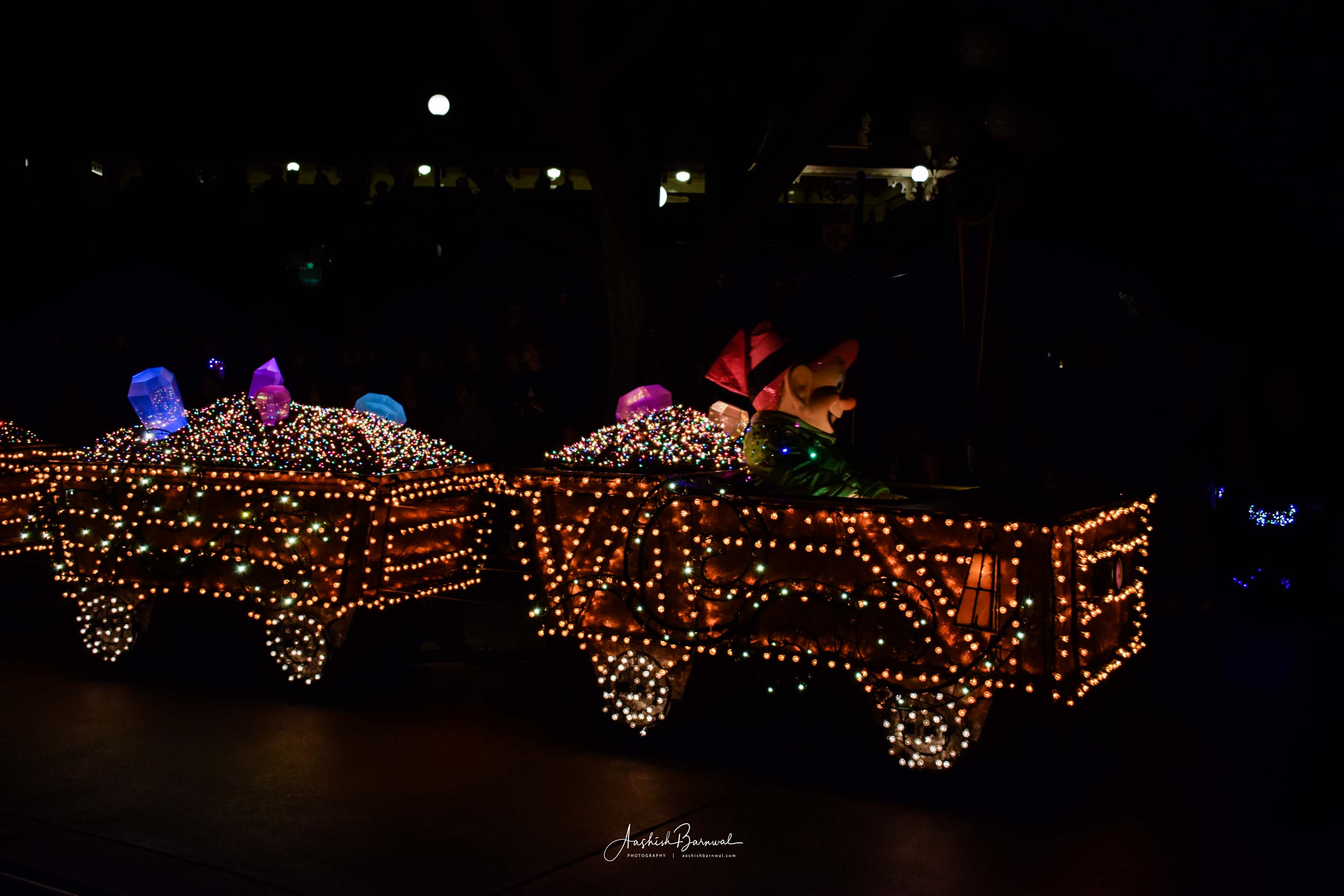 Disneyland seems particularly fond of Mozart. Being a classic music fanatic, it was pleasant to listen Mozart’s famous Allegro everywhere. It added flavors to the magical feeling. You can listen the music here.

It is really hard to imagine someone returning not happy after spending a day in the park. It was a very nice experience indeed for 100 USD.

It wasn’t a difficult call to decide which one of the Theme Parks I wanted to spend 2 days in. I booked 2 days ticket for Universal Studios for 129 bucksI knew one day was not enough to quench my thirst for Harry Potter.

If you hail from India and happen to visit Ramoji film city in Hyderabad, Universal Studios is like Ramoji, just a thousand times better. It has theme parks and attractions of many famous characters. Minion Mayhem and the girl’s house, Transformers, Simpsons, Shrek, Walking dead, Mummy, Spongebob and the most important The wizarding world of Harry Potter.

The wizarding world of Harry Potter

If you are a No-Maj and are reading this, let me warn you muggle. What you are gonna read next is not everyone’s cup of tea. To feel the magic and connect with this fantabulastic world, it needs an exceptional level of imagination and a deep dive into the story. If not, bear no delusions, it would be just another story and another park for you. Chances are you may not understand Potterheads and their craziness. 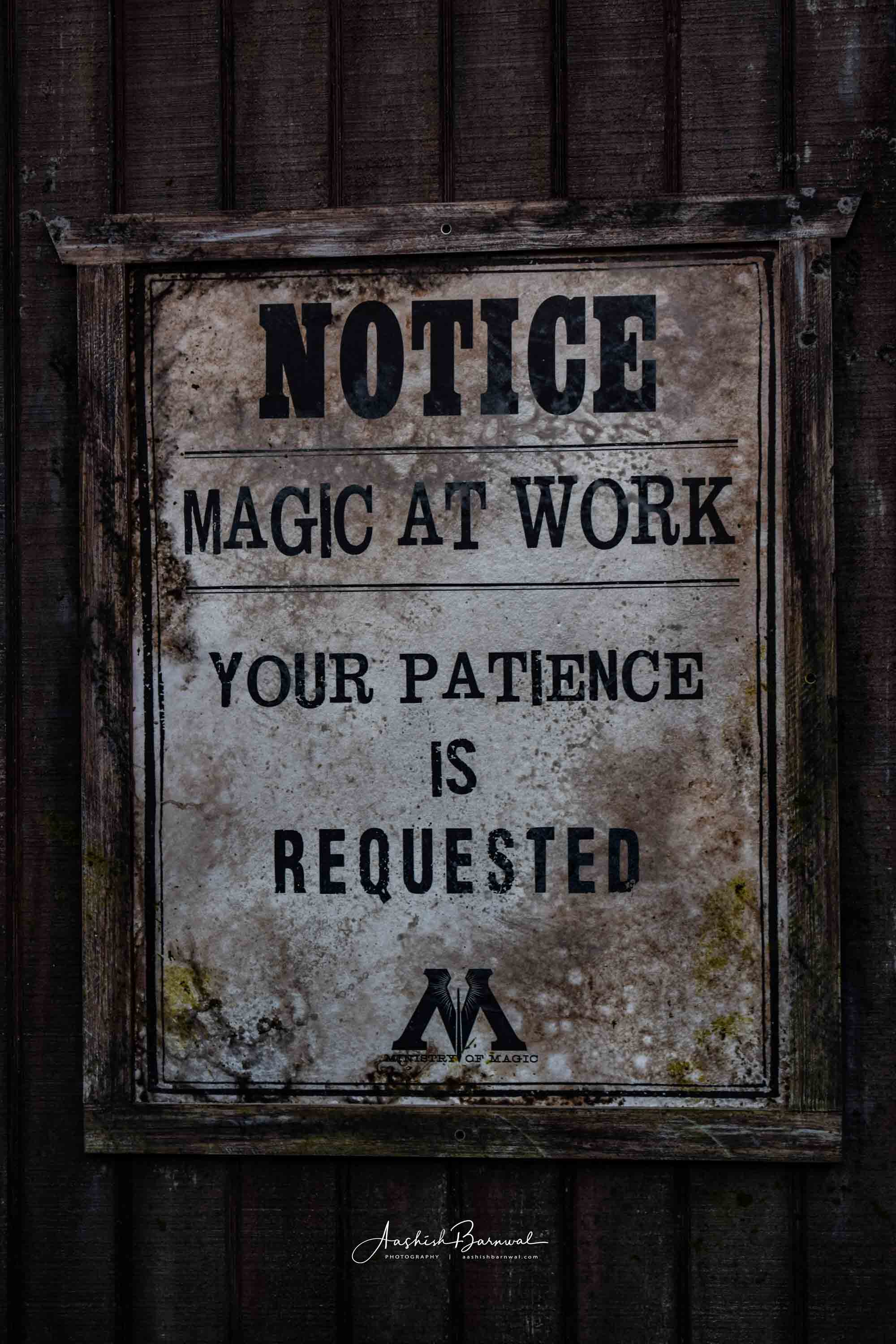 A magical experience is all I would say. Even 2 decades of Harry Potter universe hasn’t lessened the craziness, The crowd was ecstatic and delighted. Their glittering eyes were reflection of dreams coming true. Being a person who has grown up with Harry Potter waiting relentlessly, I felt like going back into childhood.

Hogwarts, Hogmeade, Platform 9 3/4, Hogwarts Express, Diagon Alley, Three Broomsticks minus Madame Rosemerta, Ollivanders, Hagrid’s hut, Honeydukes, Zonko’s joke shop, Hog’s Head, Butterbeer cart, Post office. The park has got everything in attention to detail. I couldn’t have imagined it any better. People rushing in the narrow streets of Diagon Alley was as if it came from book alive.

The school of magic

I oftentimes wonder, how different life would be, how full of magic and fantastical beauty, if my Hogwarts letter would have arrived. 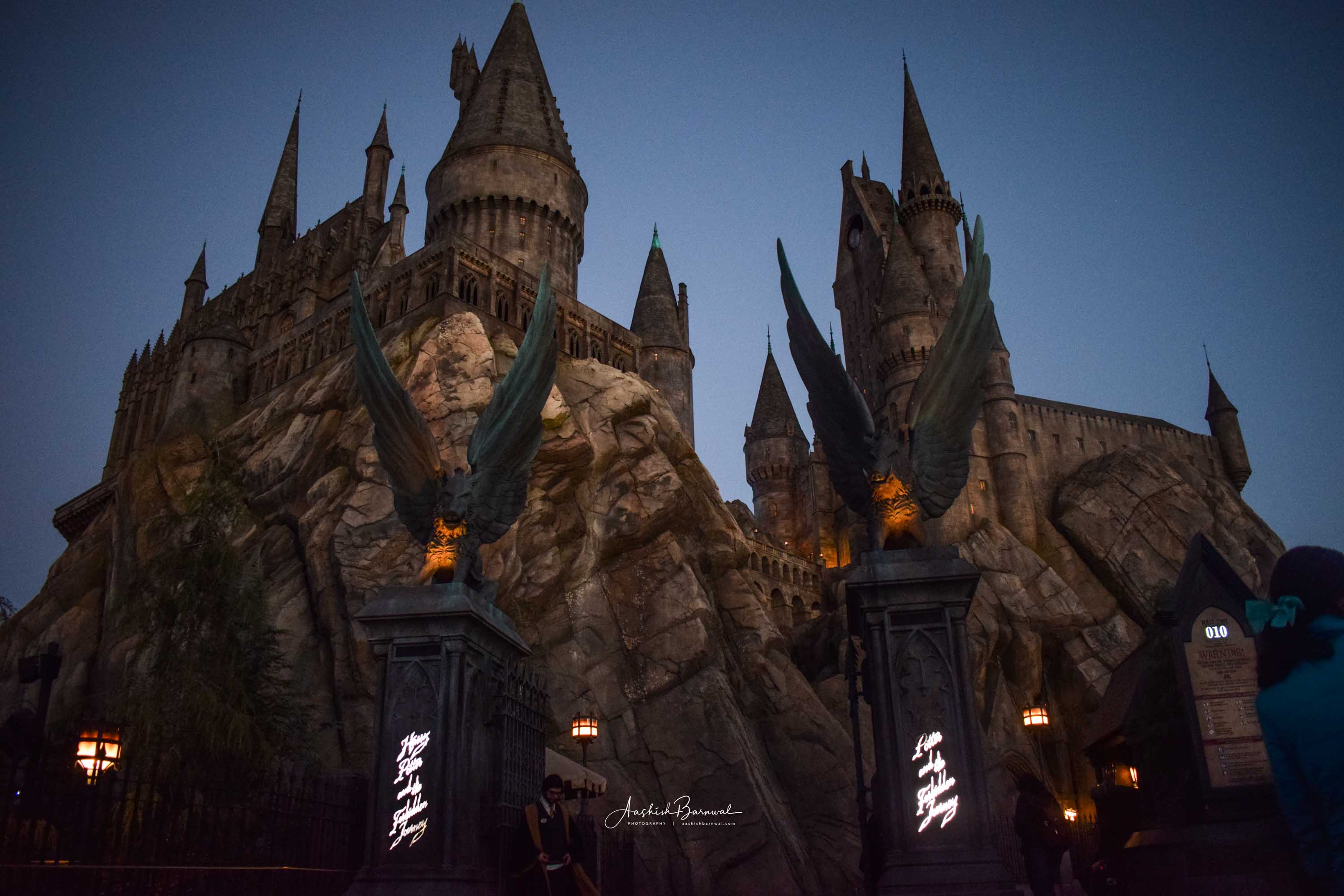 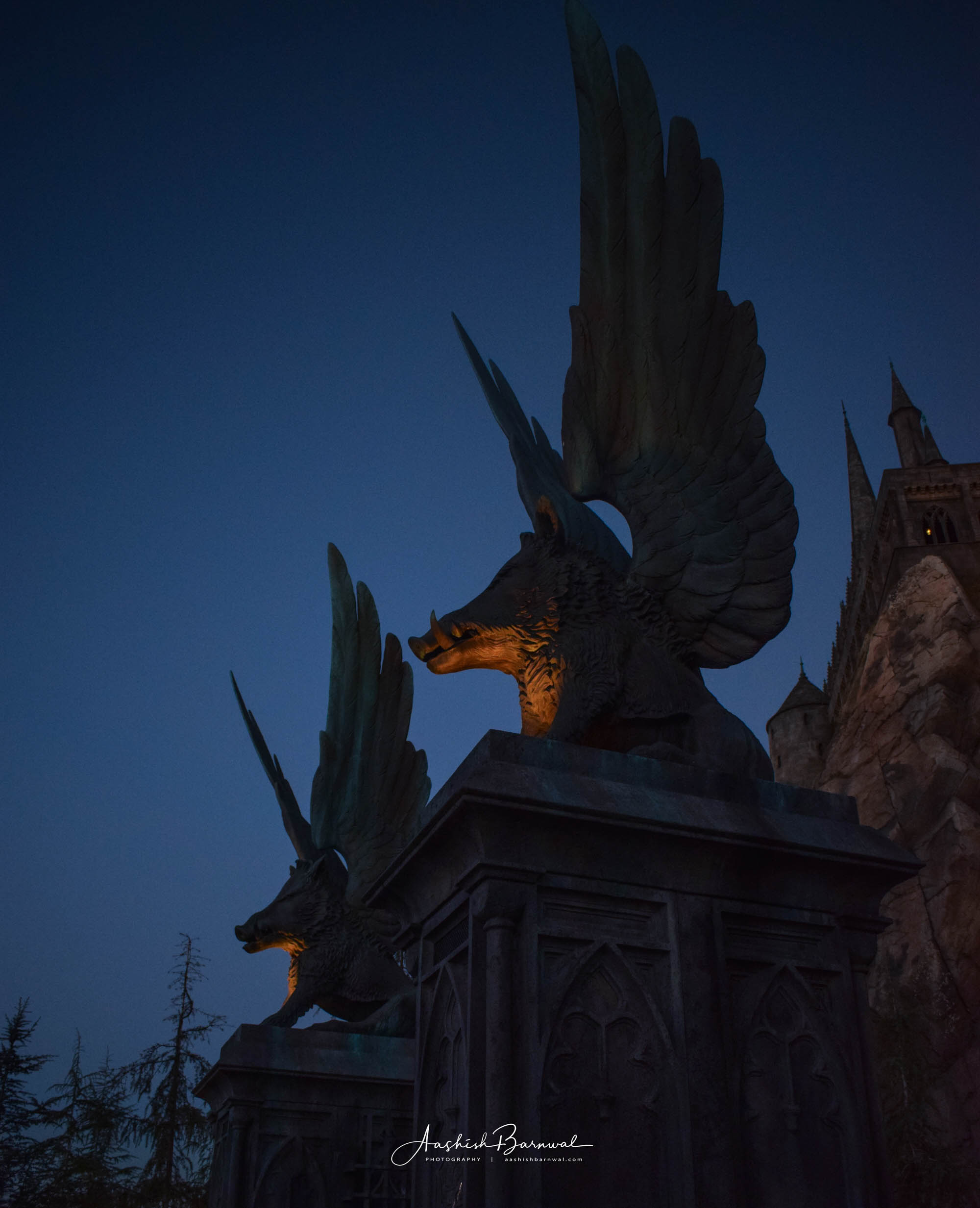 Ollivanders, makers of fine wand since 382 BC, helping eleven years old getting their first wand. He very well portrayed the scene from the first movie where Harry gets his wand. It was as if I was teleported into the movie and watched it happen. As a matter of fact, wand chooses its master. When spell was read with wrong wand in hand, the shacks broke. The setting couldn’t have been more perfect.

I got The Elder Wand, magnificent and powerful. 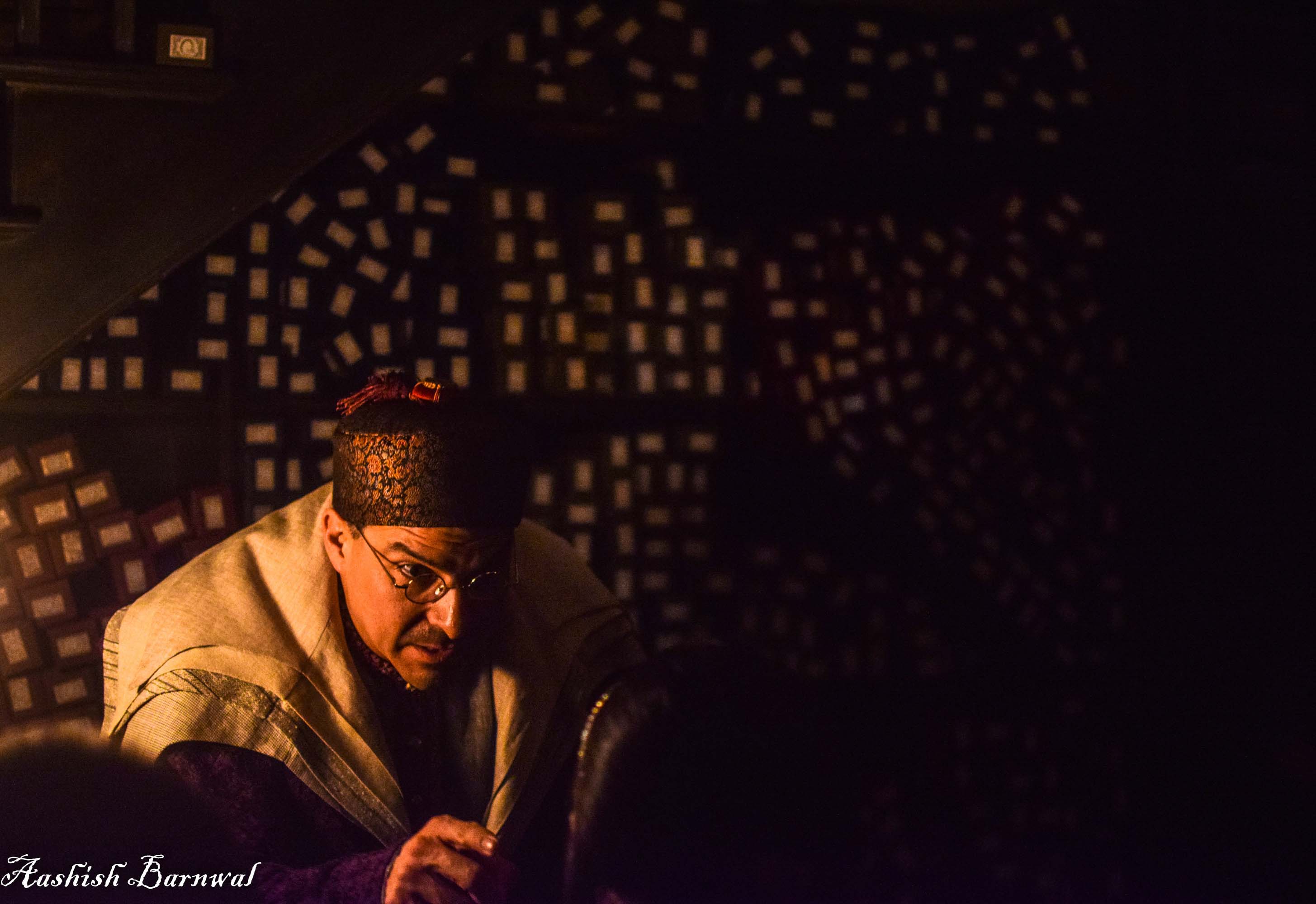 Hogwarts Express about to leave from platform number 9 3/4. 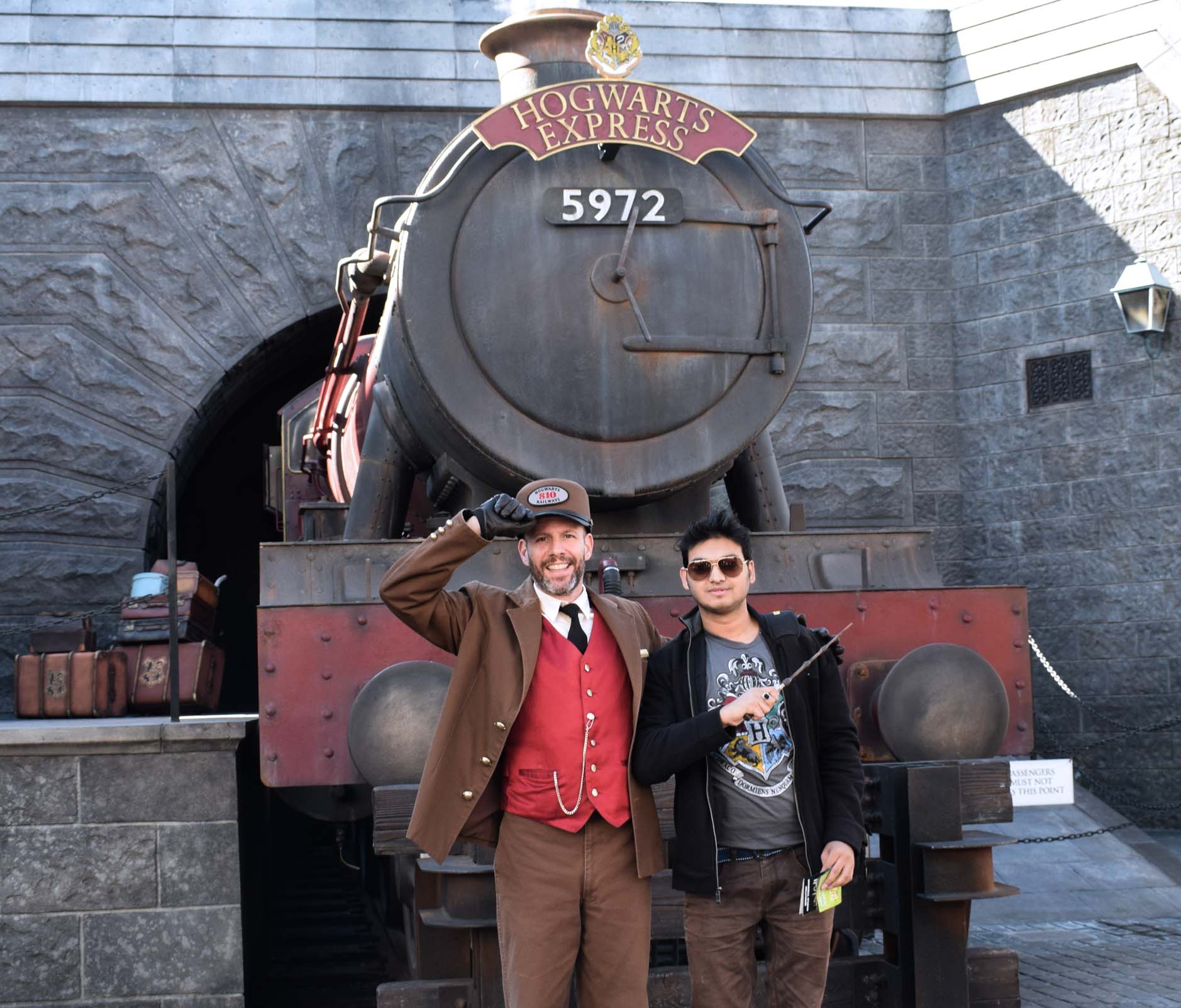 Enter, stranger, but take heed
Of what awaits the sin of greed
For those who take, but do not earn,
Must pay most dearly in their turn.
So if you seek beneath our floors
A treasure that was never yours,
Thief, you have been warned, beware
Of finding more than treasure there.

Gringotts. Wizards’ bank, run by Goblins. Gringotts is the safest place in the world for
anything you want to keep safe — ‘cept maybe Hogwarts. 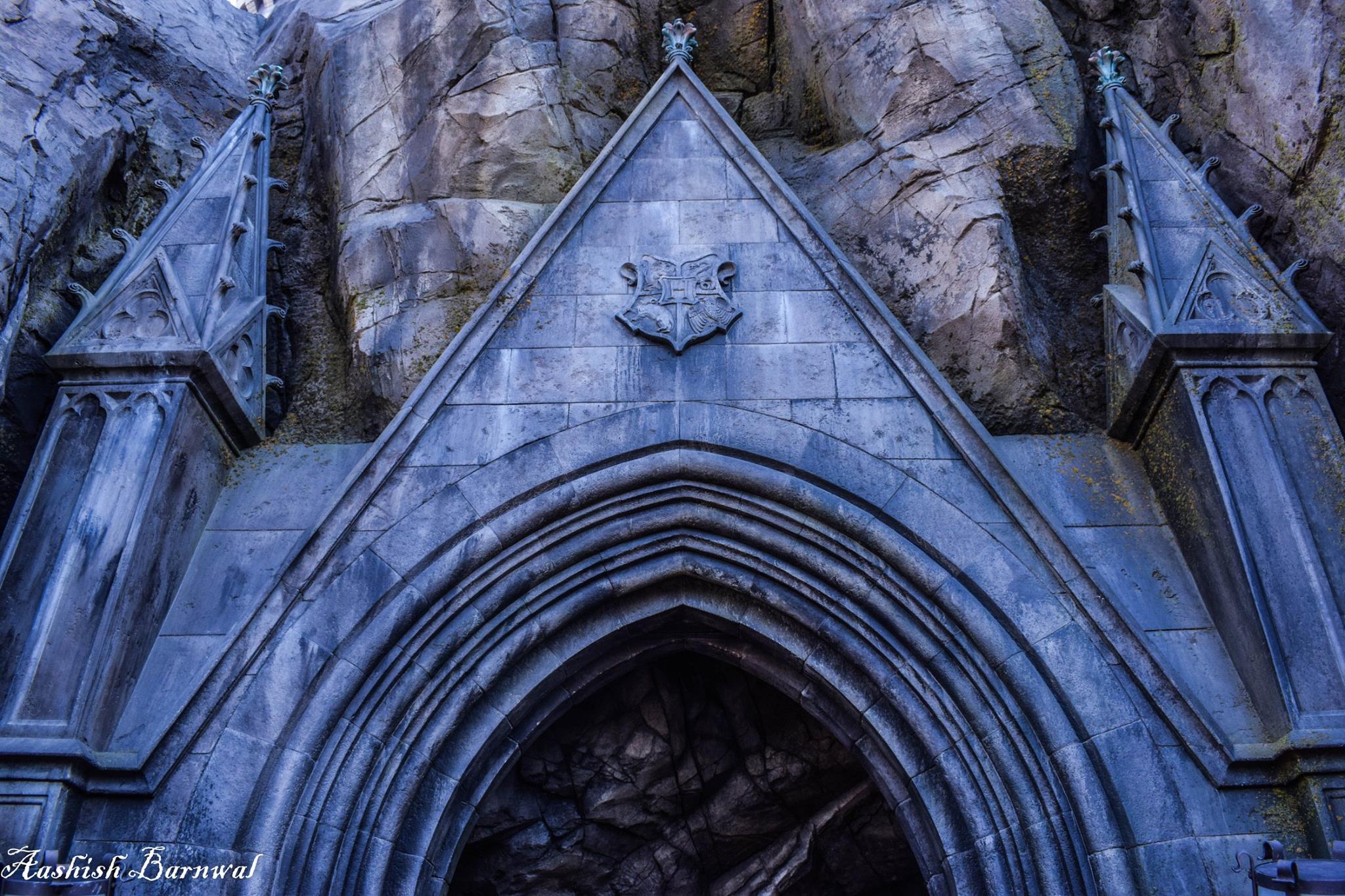 A quick note on Hogwarts and Hogsmeade. Hogwarts is a magic school where you learn magic and how to control it for greater good. Hogsmeade is a village near Hogwarts where Harry and his friends used to go to chillax after tiring and exhausting exams.

The three broomsticks and Butterbeer

Three broomsticks is a well known pub in Hogsmeade, particularly famous of its delicious signature drink Butterbeer and its beautiful owner Madam Rosmerta. 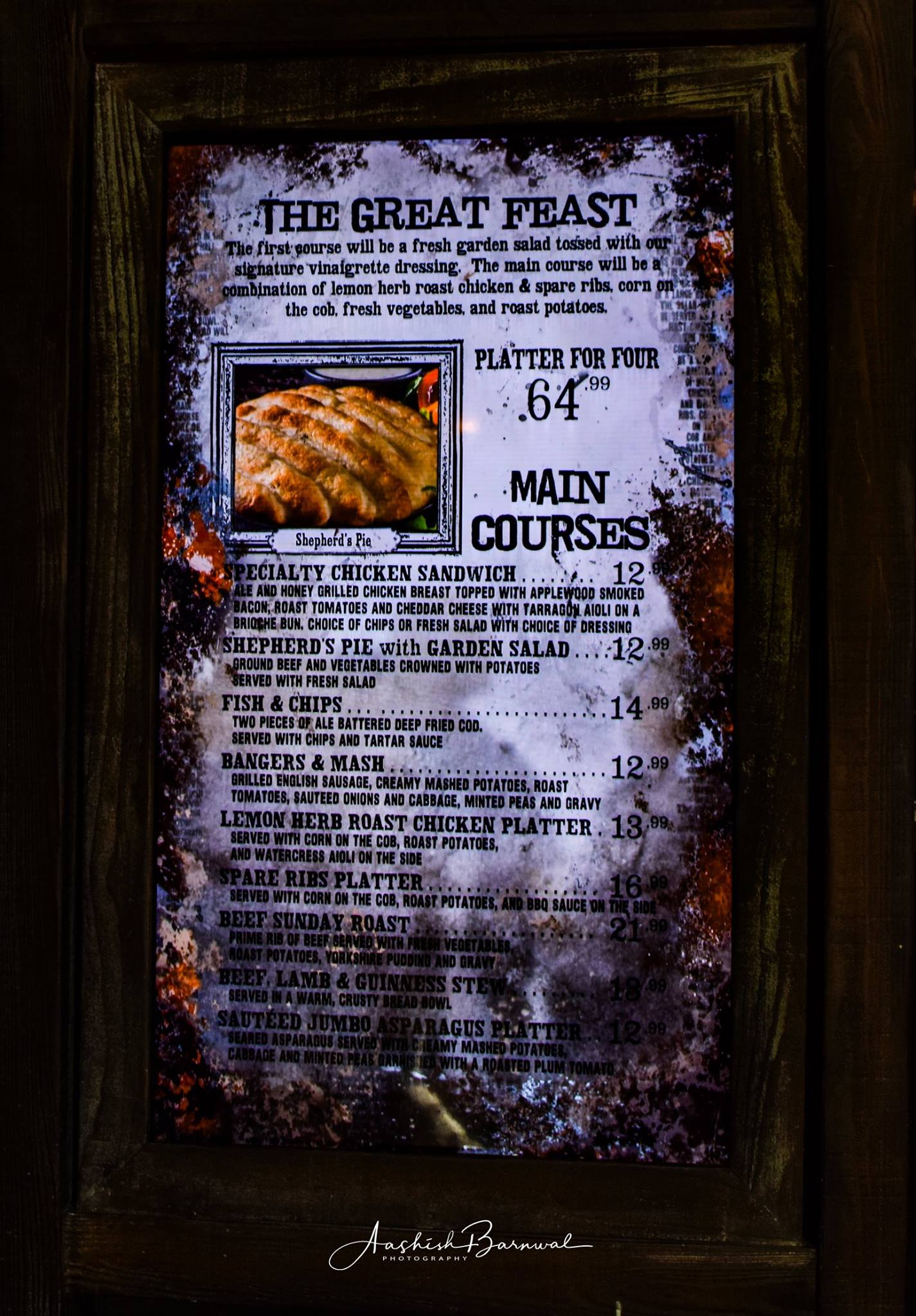 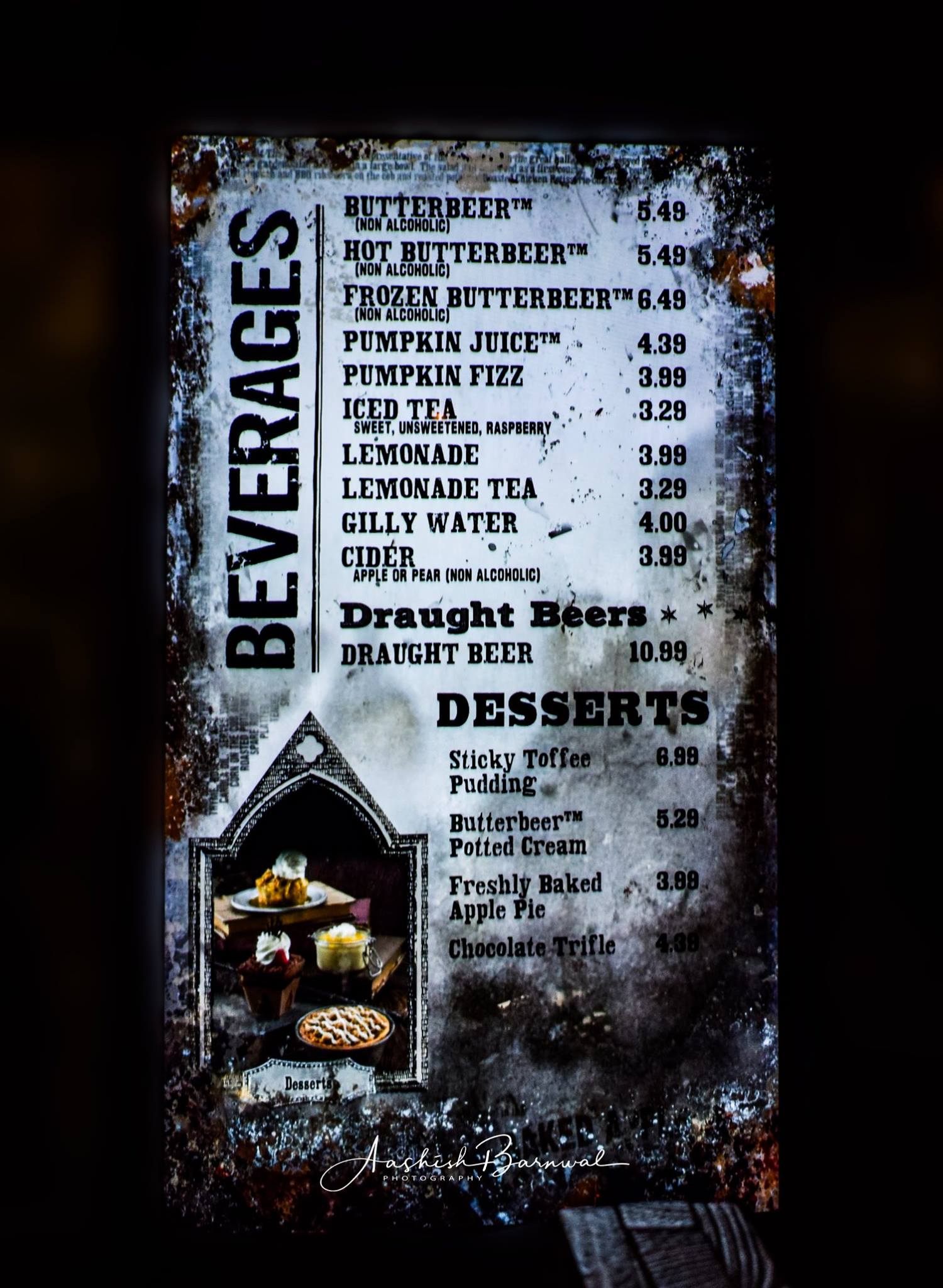 The three broomsticks – The great feast
Time for some magical food in the Hogsmeade village. It was probably one of the best days of my life so far. Being a huge Harry Potter fan, how could I miss “The three broomsticks”? The famous tavern in Hogsmeade had its own charm. The magnificent dark ambience was perfect for talking in plain sight. It is no surprise why wizards and witches choose this place to hear gossips. Even the place being full of muggles that day couldn’t suppress my goosebumps.

A pint of Butterbeer at Three Broomsticks.
As a fan of wizarding world of Harry Potter since my very childhood, I fantasized about having a taste of Butterbeer. I always thought it would be like magic flowing in my veins. As I grew up and got a chance to have it, I must say it tasted something like Butterscotch. The Butterbeer lived up to its expectations. I could literally find myself diving into the magical world and remembered one of the greatest friendship I have ever known, the friendship of Harry, Ronald and Hermione. Sad part was I had to drink this alone.
I hope someday I will visit there again with my Ronald and Hermione. 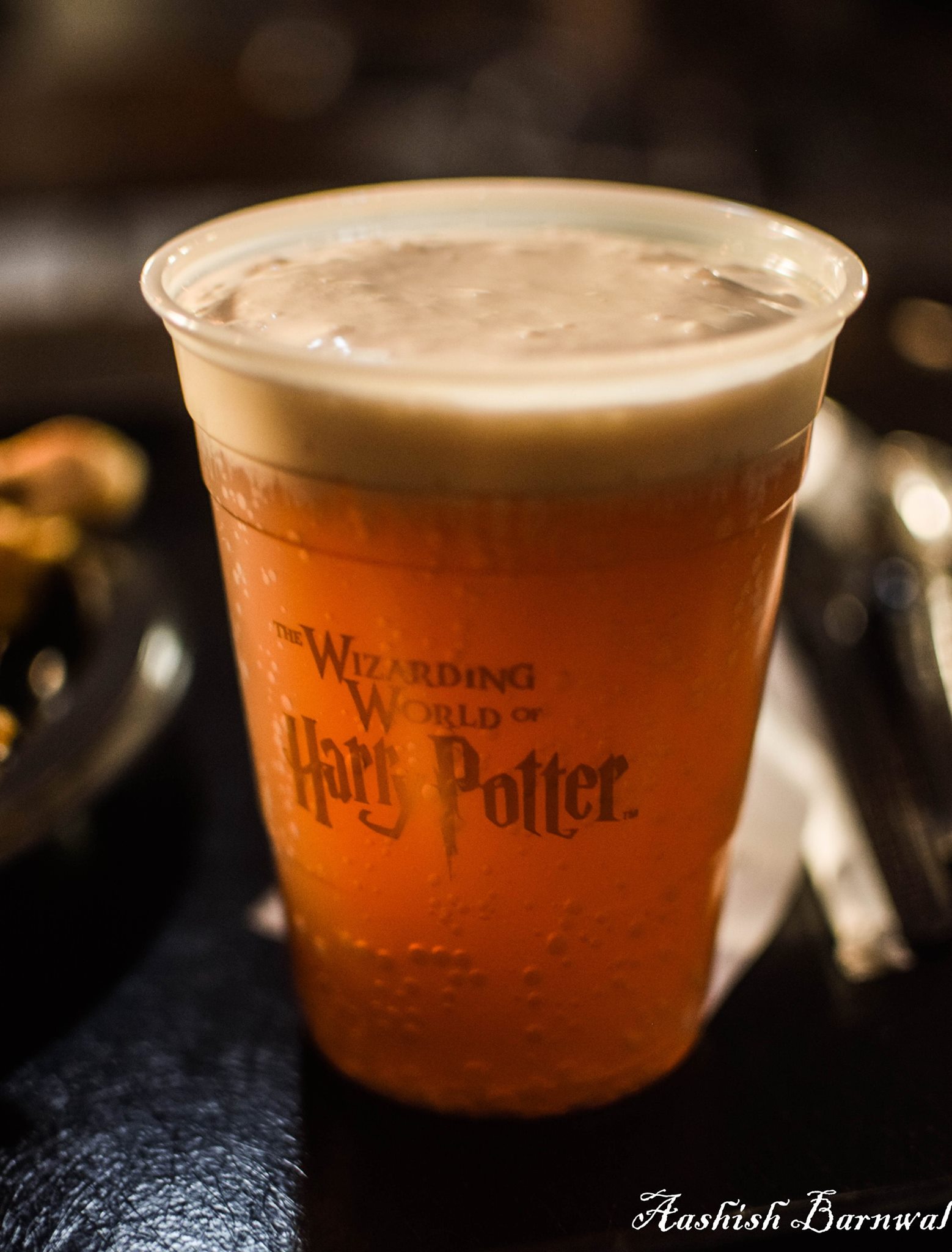 Do you remember the roasted chicken Harry used to crave for when he stayed at his Uncle’s place during summers? Or when he used to eat like a hungry beast after long Quidditch practice?
Well, I tried the “Lemon herb roast chicken platter” at Three broomsticks and it was worth all the rumor. 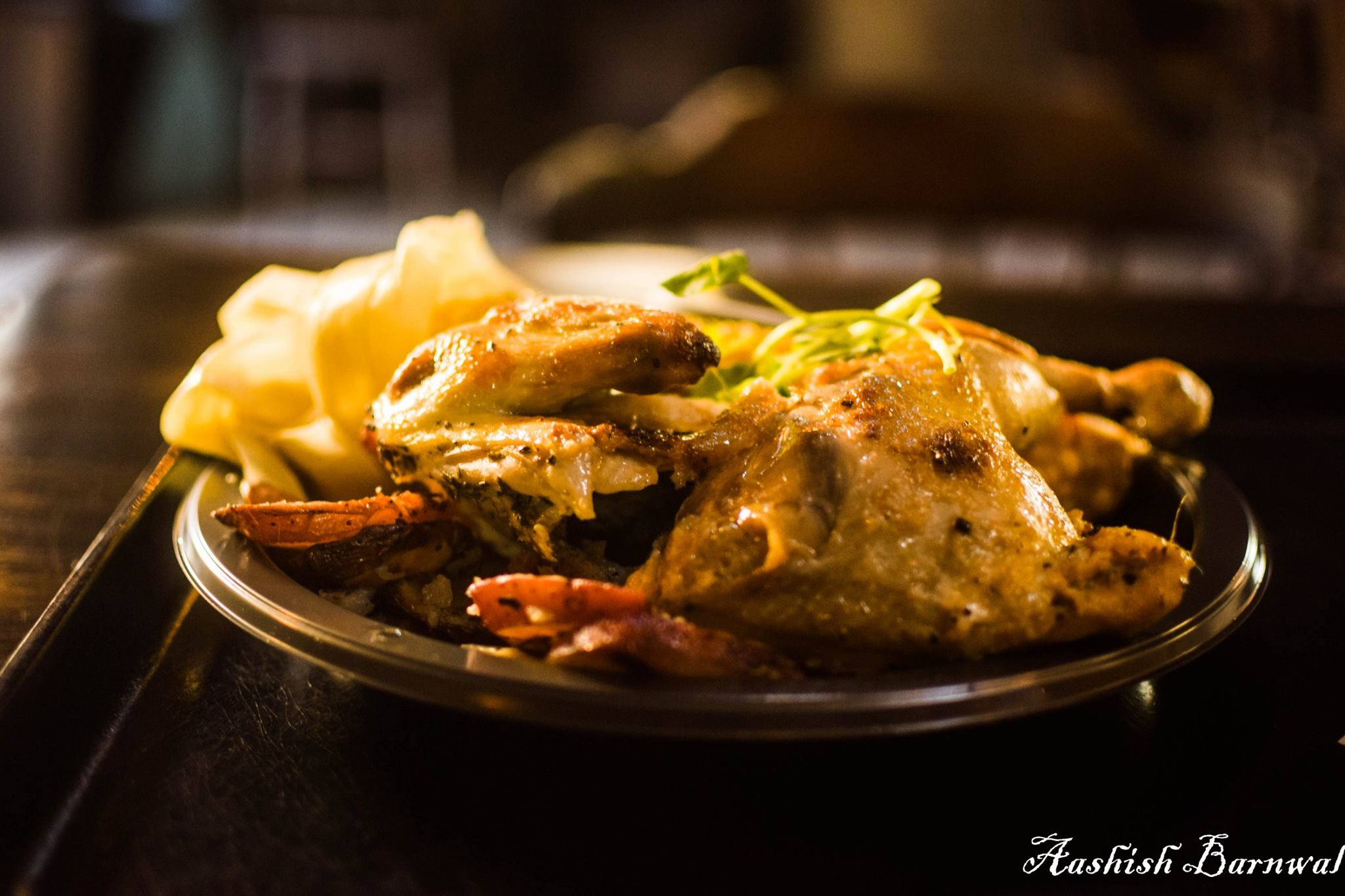 The second home of Harry, Ronald and Hermione where they used to spend their free evenings when not worrying about Quidditch practices and studies. This is where Norbert was born. The lantern hanging across the wooden door was often used by them in Forbidden forest. 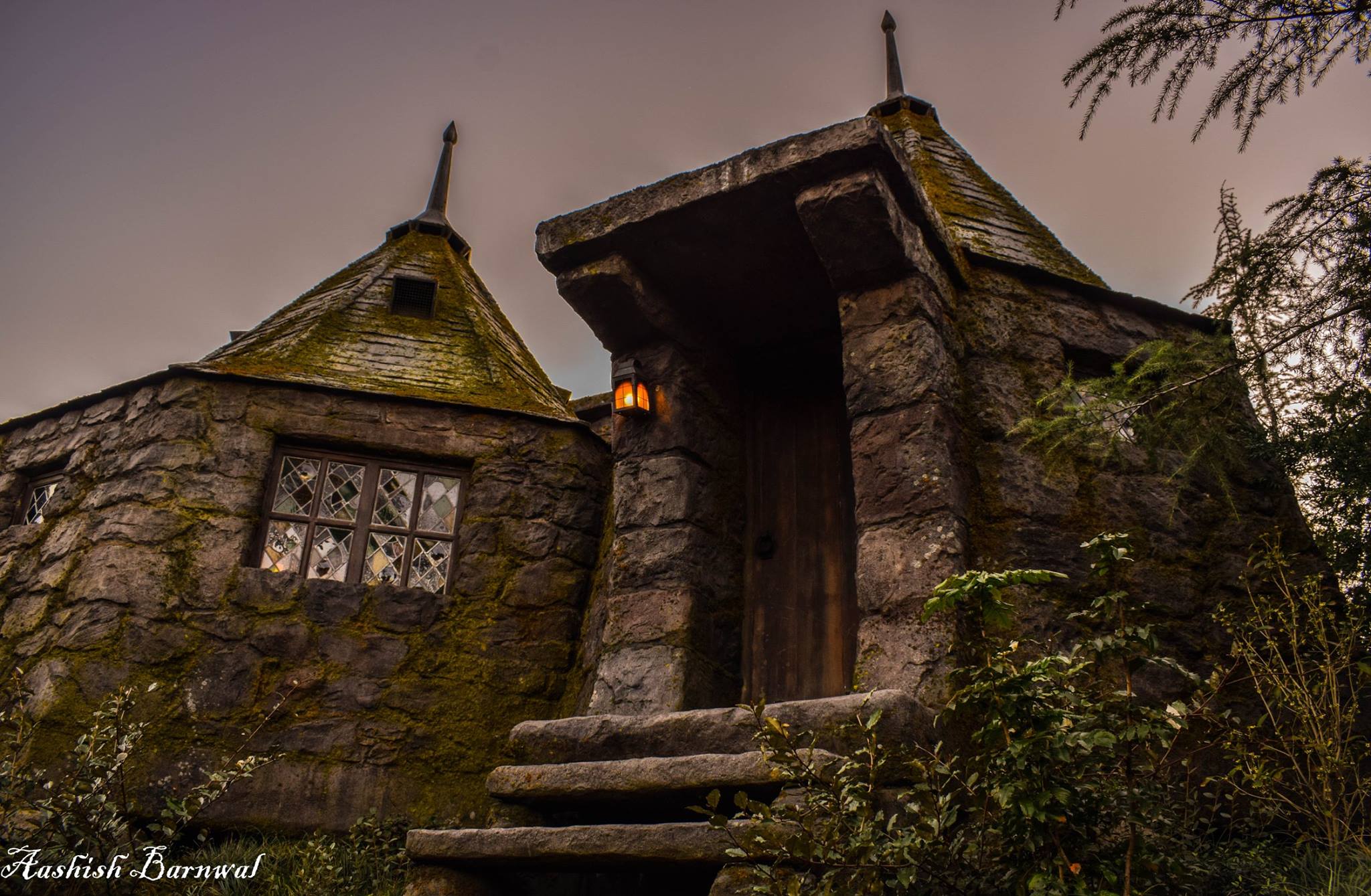 Magic was in the air

A kid practicing trying to rotate cauldron using Wingardium Leviosa spell in Hogwarts. Two kinds of wands they were selling in Ollivanders – Interactive and non-interactive. Interactive ones were real magic and could be used to turn lights on/off, float objects, turn on the water in a fountain, make birds sing and many more such stuffs. 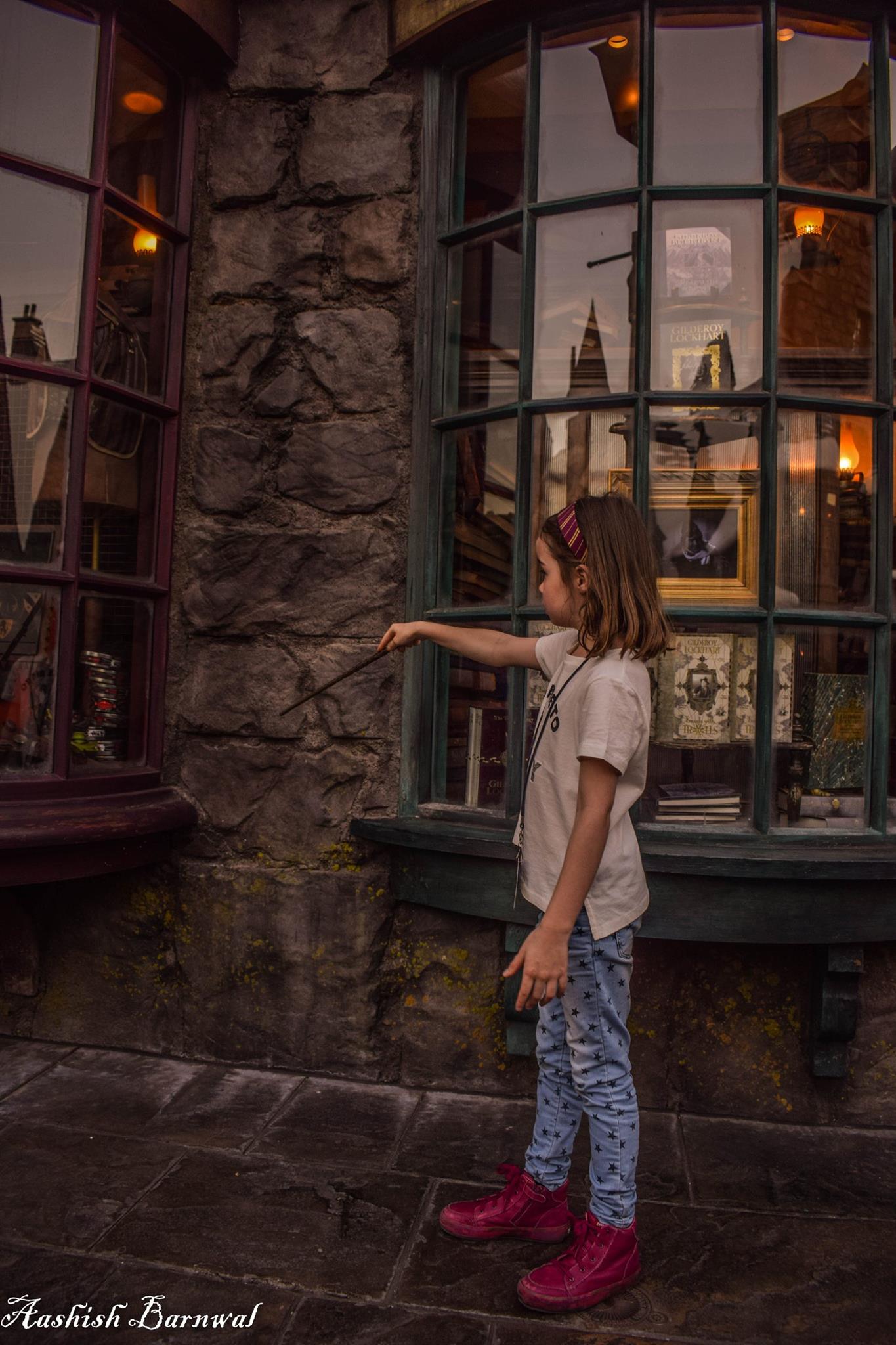 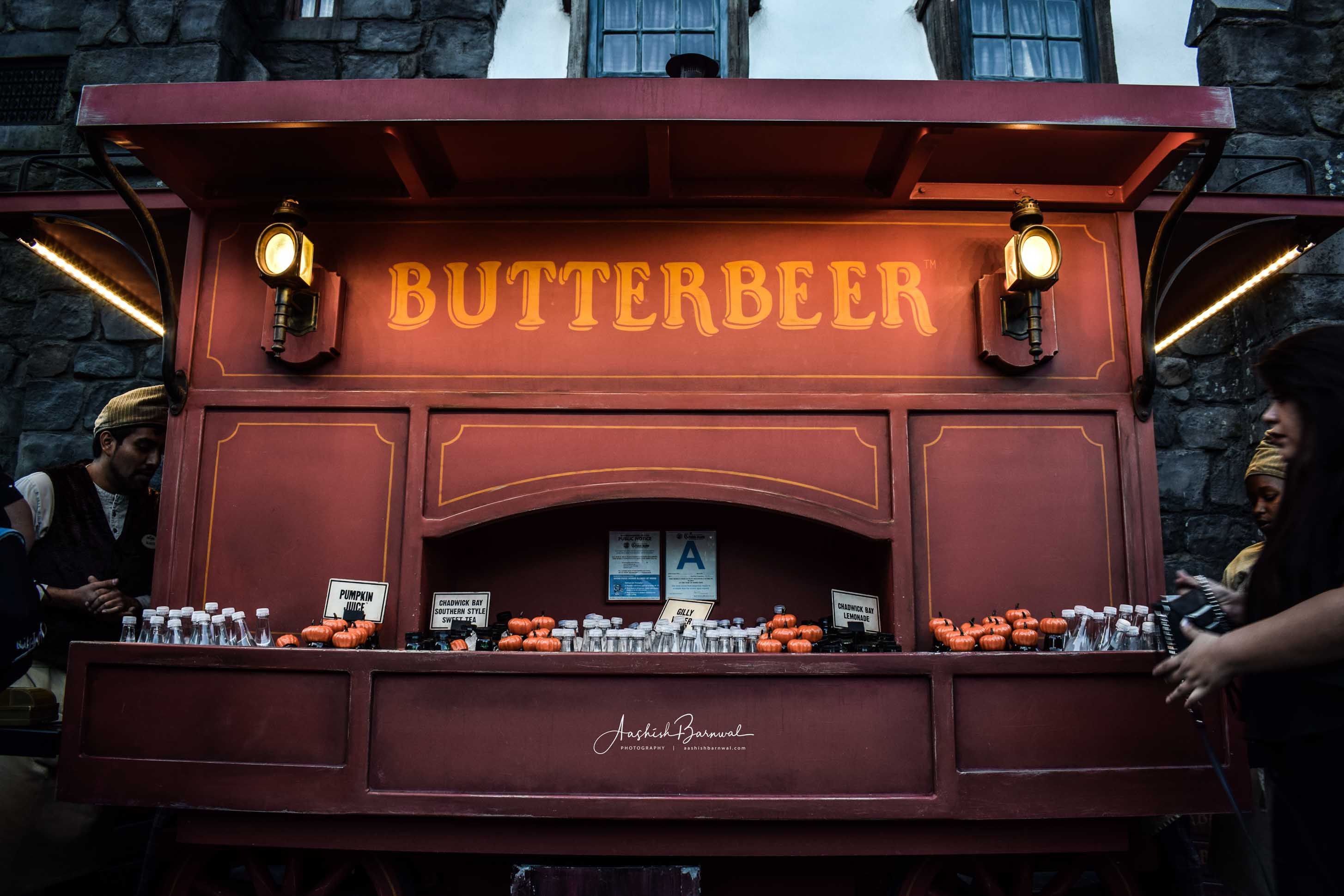 To be continued… In the next post, I will talk more about Universal Studios and San Diego story.